According to the report of Department of Environment (DoE) and International Center for Integrated Mountain Development (ICIMOD), high air pollution has engulfed Lumbini, the birth place of Lord Buddha. In the recent times, the level of pollution has gone up due to multiple factors, according to officials.

A rod factory and a cement factory are located behind and in front of house owned by Sita Khanal of Maya Devi Rural Municipality in Rupandehi district. Many locals including Khanal are badly affected by dust and smoke exhausted by these factories for years. “We frequently become sick because of dust and smoke,” said Khanal. “If we have common cold once, we will never recover,” she added.

Local authorities have not taken sufficient efforts to address the program of pollution.  Local government has not taken any initiative to control pollution, she said. “Chairperson of the local body has never spoken a single word about the air pollution.”

Dozens of trucks come from India bringing materials for more than three dozen of industries—cement, rod, paper and brick etc along Bhairahawa-Lumbini road. These vehicles ferrying lime stones and ash for cement factory are adding woes to the problem. According to the locals, the factories release black smokes by night more than by day. The industries used to operate for eight hours earlier but they operate 18 hours now.

Air pollution measured in 2.5 PM is found 155mg in Lumbini while 40 is taken as acceptable in Nepal. It is very dangerous to breath in Lumbini, said the experts. According to World Health Organization (WHO), the air pollution can cause cancer, pneumonia and stroke among others, affecting the human health. Nearly 30,000 people die of air pollution every year.

Air pollution of this area has not only affected human health but also hampered the tourism industry. The air pollution has worsened the situation of culturally famous place of Lumbini, which is a major attraction for tourists, said tourist guide Birendra Nath Pande.

“We are used to stay in dust and smokes but common cold and respiratory problems affect us,” he said.

“Foreign tourists cannot stay for a while in Lumbini. It will badly impact on tourism sector,” he said, urging to plant samplings and promote greenery. The dust and smoke released from the industries have created problems to people, animals and plants, as well as adding woes to pollute rivers and streams, the locals worried.

Fisherman Syam lal Munsi said, “Whole water is contaminated with wastes. No fish is found.”Local social worker Lal Prasad Lod said that the industrial chemicals are directly released to streams and rivers. “It has blackened and polluted waters,” he said.

Many locals have got employment opportunities in the industries of Bhairahawa-Lumbini region. Therefore, they cannot openly oppose the pollution. They insist on minimizing the pollution instead of shutting them down.

Industries play vital role to make the country self-reliant. But if we don’t care about pollution while developing, it will be disastrous. Lumbini is an instance of it. The industries were started establishing in Lumbini 20 years ago. Though rule does not permit to open industry at the distance of 15km from Lumbini, the industries have been opened at the distance of 12km.

According to regulation 2073BS of Industrial Entrepreneurship Act, the industries need to control the pollution. The industries older than 20 years or new ones have not followed the rules in practice.

A series of cement factories are seen on row along Bhairahawa-Lumbini road.

The existing and opening industries around Lumbini region are serious threats to environment.

Regarding to this concern, a discussion program on Air Pollution in Lumbini was held with stakeholders on September 27 by the Nepal Forum of Environmental Journalists in Lumbini. The local governments, provincial government and journalists of Province 5 took part in the discussion.

Researcher Viku Bibekananda, who has been studying on Lumbini since long, said that various industries in Lumbini have generated pollution immensely. The vehicles coming to these industries create traffic jams as well as release emissions, polluting aerial distance of 5km.

NEFEJ president Arjun Dhakal said the 2.5PM can directly ham human lungs. “These particulate matters can cause stroke, heart disease, cancer and pneumonia,” he said. “It will most affect the children.”

Citing WHO report that estimates 30,000 people annually die from air pollution in Nepal, Dhakal said that number of people dying annually from pollution is four times higher than 2015 earthquake.

Prof Jitu Gir of Tribhuvan University doubted over the data presented at the program. “What are the smart city components?” he questioned Lumbini Development Trust and mayors.

NEFEJ member Nimesh Regmi said that the Nepalese people are suffered from attitude of cleaning self but not city. “development is good but we have to think harming environment less while carrying out development,” he said.

Mayor Manamohan Chaudhari of Lumbini Sanskritik Municipality underlined the need of coordination between Lumbini Development Trust (LDT) and the municipality. “We are formulating plans to tackle pollution in Lumbini,” he claimed.

Saroj Bhattarai, member-secretary of the LDT, said that they don’t have rights to stop pollution of industries. “We will only tell the distance between LDT and opening industry,” he said. “We are not the authority or have no rights to divulge details of releasing smoke and pollution.”

Narayan Sapkota, member of NEFEJ, said that there are 42 temples in Lumbini but no management has been adopted to settle down waste problems generated in the temples. “We need to manage landfill site too. Here are many problems. We have to work on curbing the problems,” he added.

Provincial Minister for Tourism, Industry, Forests and Environment Lila Giri said that the laws to check pollution are yet to be implemented. “We need more laws to implement the existing laws,” Giri claimed. “We are working to develop such laws.”

Giri said that industrialization was necessary but needs to set standards for them. “We held discussions with industrialists and it will be solved soon,” he said. “We will urge them to abide by laws.” 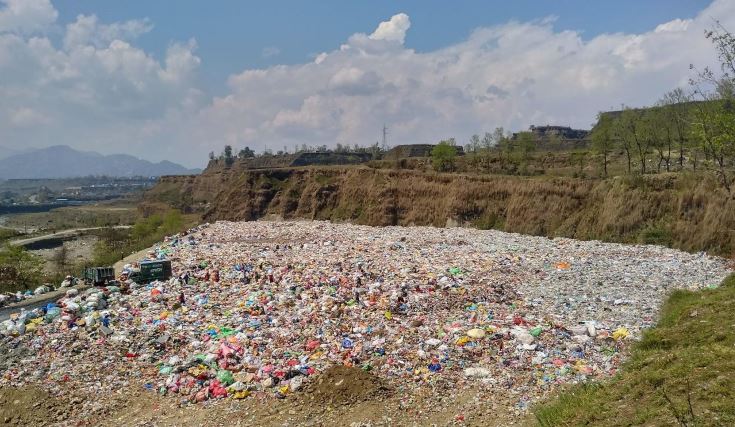